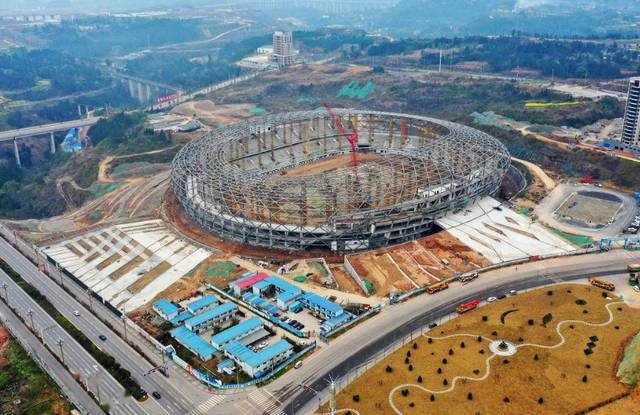 Here, once a barren land, now looking around, under the blue sky and white clouds, beside the wetland park, the stadium is straight, heavy, and dazzling, just like a bright “pearl” that sets off the sky of Bacheng. Hui. As the first large-scale comprehensive gymnasium in Bazhong, it took four years of construction to overcome technical difficulties, and the “Bird’s Nest” shape has emerged. In the near future, as a brand-new landmark in Bazhong, the city sports center will surely drive the nationwide fitness boom, gather popularity and business spirit, and expand regional influence and visibility.

The steel roof of the stadium is an oval-shaped annular space structure with a maximum elevation of 41.7 meters, a long axis of 266.6 meters, and a short axis of 230.0 meters.

The largest gymnasium in northeastern Sichuan

Looking at the city sports center in the distance, it is like a huge bird’s nest placed on the ground. Until you stand in front of the gate of the Municipal Sports Center, you can really see the rigid and heavy steel structure of the stadium. The words majestic and magnificent seem to be unable to describe the shock it brings.

The venue has a 400-meter standard track and field sports field, as well as basketball, tennis, badminton and other ball training halls and sports fields, as well as supporting facilities and equipment such as parking, greening, and landscape, including competition training, assembly performance, national fitness, venue operation and other functions. There are 30,812 seats.

After completion, the total construction area of ​​the city sports center construction project will reach 61,410 square meters. Prior to this, in addition to Chengdu, the largest and highest-level stadium in the province is the Nanchong Sports Center. The main stadium has a construction area of ​​more than 50,000 square meters. In the future, this record will be rewritten with the completion of the Bazhong Sports Center, which will also become the largest comprehensive stadium in Northeast Sichuan.

“In order to ensure the smooth completion of the hoisting of the steel reticulated shell, the project deliberately used 40 large trailers to transport a 750-ton supercar from the field. This is the largest crane used in the hoisting process.” Wang Qingfa, Chief Engineer of the Municipal Sports Center Project Department, introduced. There are 111 mesh shells and roof mesh shells for the steel structure project, including 36 steel columns and 36 large ring beams, and the total steel consumption is about 8,000 tons.

At present, the main project of the Municipal Sports Center has been completed, and the steel frame structure has been completely hoisted. Thirty-six radial cables are being hauled to drive a hoop cable to complete the tension of the cable body, to withstand the load of the cable beam and the entire roof, and the curtain wall and roof construction on the periphery of the building.

The steel frame structure is unique in shape, and the design incorporates Bazhong cultural elements

Over the past four years, builders from all corners of the world, with perseverance and perseverance, built an ingenious “bird’s nest” on a barren gully. The foundation treatment project and the main project capping were completed in 510 days, and all the steel structure hoisting was completed in 130 days…Since the construction started in 2016, the construction team announced the coming of the final stage with an efficient construction schedule.

Standing from afar, the city sports center resembles a bird’s nest woven from tree branches. The main reason for this is the cable-supported grid steel structure, which is a new type of building structure developed based on bicycle wheels. According to Peng Tao, the designer of the Southwest China Architecture Design Institute, in the styling design stage, the enclosure structure of the venue, as well as the scale and size of the venue were considered comprehensively, and this relatively suitable large-opening car-spoke cable-supported grid structure was selected.

The steel structure “Bird’s Nest” is unique in shape, and the design of the venue is also unique. “The design of the main stadium incorporates local cultural elements in Bazhong.” Peng Tao introduced that the facade of the stadium is undulating, just like the light and shadow of the stone carvings in the Nankan Grottoes. The general design concept of the City Sports Center is red culture, and the design of the entrance curtain wall also uses the gorgeous “Chinese Red”.

“At the beginning of construction, this type of steel structure building was not common in China. The city sports center adopted this type of building, and there are only a few in the country.” In a stadium of the same size, this kind of structural steel is the least used, saving about 4,000 tons of steel.

To achieve this design, the biggest technical difficulty is the large amount of steel welding and high welding deformation control requirements. The various components of the roof structure are mainly connected by full penetration welding, and there are a large number of on-site joints, such as on-site ground and high-altitude welding, dissimilar steel welding, and round pipe welding with different wall thicknesses. The welding volume is large and complicated. In order to control the welding stress and deformation, the design and construction team immersed themselves in tackling key problems, formulated deepening and processing plans, and successfully solved the technical problems.

Promote the upsurge of national fitness, and the sports industry enters the fast track of development

Once upon a time, competitive sports was a bitter injury faced by Bazhong. The construction of sports facilities in Bazhong has not been able to meet the needs of the masses for sports venues, nor can it meet the requirements of large-scale events. With the rapid economic and social development of Pakistan and China, and the accelerated construction of sports infrastructure, the sports industry is entering the fast lane of development.

From the 2013 Tug-of-War Invitational Tournament in Mainland China and Hong Kong and Macau, to the 2014 National Tug-of-War Championship and the National Car Rally, to the Tour of China International Road Cycling Tournament, which came to Bazhong for five consecutive years, international and domestic competitions were successively held in Bazhong.

Bazhong people have never stopped pursuing sports dreams. In order to promote the construction of sports facilities in Bazhong, all the way from “repair” to large-scale construction, and then to the emergence of the city sports center, it will finally fill the gap of no large-scale sports center in Bazhong. It is expected that by the end of this year, a modern cultural landmark with diverse construction functions and complete facilities will be presented to the world.

The completion of the Municipal Sports Center will create conditions for the city to host large-scale municipal comprehensive sports games and some national-level events. It can also provide professional training and teaching venues for national and municipal sports teams, as well as various cultural arts. Comprehensive functions such as performances, assemblies and exhibitions. Bazhong people can see bigger and more sports events at their doorsteps. With the holding of sports events, it will surely gather popularity and business spirit, and expand regional influence and popularity.

The completion of the Municipal Sports Center will also promote the construction of a modern industrial new city in the Bazhong Economic Development Zone and a livable new city. In the future, the city sports center will share space with cultural centers, central parks, and Qinba Expo Center, complement functions, and integrate landscapes to create an open urban public space that not only assumes the evacuation function of the sports center, but also plays the role of the urban living room.

Sports serve the people’s livelihood, and sports unites people’s hearts. Increasingly rich and complete sports projects will become a vehicle for witnessing the development of sports in Bazhong, and will attract more and more people to join the ranks of national fitness, which will surely play a role in promoting the construction of healthy Bazhong.